Brown vs. Board of Education 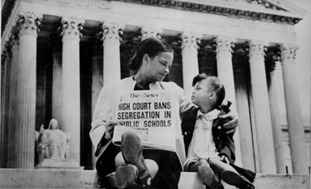 In 1954, segregation was in the process of a change when the Brown vs. Board of Education decision was introduced.  The Brown vs. Board of education was a landmark case that challenged segregation in American schools.  Oliver Brown was the parent of a black child who was denied enrollment to a white school. After losing his battle in the lower courts, Brown eventually took his fight to the Supreme Court.  After thoroughly reviewing the case, the supreme court decided that segregation did violate the equal protection clause, thus opening desegregation in some schools.
A black woman sitting on the steps of the Supreme
Court holding a newspaper stating that the segregation
of public schools is banned.
--Photo Courtesy of History Martinez--
Powered by