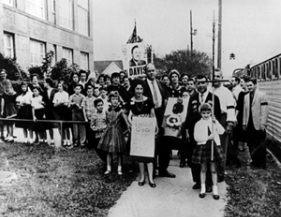 In the mid 1900s, society were very different from how it is today.  Inequality between blacks and whites were very prominent.  At the time, blacks and whites could not use the same drinking fountain, bathroom, building entrance, eat in the same café, or use the same taxi.  Blacks were also forced to sit at the back of the bus and were required to give up their seat if a white person didn't have one.  Also, most of the police and judges were whites, there usually wasn't any other race.   Even though the United States Constitution had an equal protection clause, schools were still segregated at the time and the two races never mixed.
A picture of protestors holding crosses and
signs protesting school integration.
--Photo Courtesy of Lake Land Schools--
Powered by