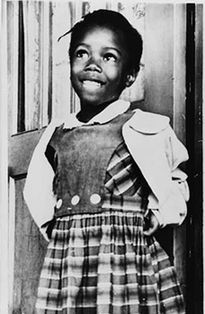 There are many people who contributed to the Civil Rights Movement in American History. Some are very well known while others perhaps not so much. One very important member and probably one of the youngest involved in the civil rights movement was Ruby Bridges.    At the time of the Civil Rights Movement, Ruby Bridges was a 6-year-old black girl living in New Orleans.   Ruby bridges lived during a time when society thought very differently of black people.  Ruby Bridges taught society that having a strong will and strength has no size or age barrier.


Ruby Bridges deserves the Achievements in Rights Award due to her achievements in leading the way for integrating America's schools, being one of the youngest members of the civil rights movement, and showing courage and perseverance when she was alone during the struggle for integration.